In my parents’ original house, they were super close to our neighbors, so close they became my godparents when I came along.  I have very fond memories growing up, picking blackberries and raspberries in their yard (my brother picking them and smashing them all with his friend and hopping the fence before Aunt Gerrie could catch them).  Every fall, I remember going to their house and she would have fresh jams and refrigerator pickles and I thought this was the coolest thing.  They were crisp and refreshing, perfectly fresh.

I remember her giving me the recipe but lost it a long time ago.  I have since been playing with all things pickled although I always make batches of refrigerator pickles in the fall when cucumbers are dirt cheap or you have a million from your garden!  I love this because you can customize it, you can make is spicy or with a little more pucker, you can even throw other veggies in.  For our purposes today, I will give you the basic recipe and then you can play around with it.

You can use whatever cucumbers you want, if pickles (they are whole pickles unpickled) are on sale, I’ll get those, you can also do the seedless English cucumbers.  If you are using regular old cucumbers, I would say you can use 1 cucumber to make 2 pint jars, it’s not an exact science, the thinner you cut them, the more you can get in a jar but if you make them about a 1/4 inch thick, they are not as pliable.  To make 2 pints, slice 1 cucumber about 1/4 inch thick, leaving the skins on.  Put 1/2 cup of white vinegar in a 1 pint Mason jar (or combine the batches for a larger one) and add dill, about 1/4 cup, no need to chop it, just put the whole fern in there.  Add 2 cloves of smashed garlic to the jar and 2 tablespoons of salt.  Put the lid on and shake it up to get the salt partially dissolved.  Add cucumbers until about half full, don’t pack them in tight, you want the fluid to freely move around, then add another fern of dill, then fill the jar with cucumbers, again not packing it in.  Top the jar off with water and seal it.  Do the same to the 2nd pint jar and refrigerate for a minimum for 3 days.  These will last for months, but I am sure they will be long eaten before that.

If you wanted to make this spicy, you could add some hot peppers like jalapeno or fresnos, or red pepper flakes.  If you wanted more pucker, add more vinegar.  I made a batch for my 1 year old daughter with less vinegar and salt, and peeled the cucumbers.  This is a very basic picking technique that doesn’t require a lot of effort or culinary skill.  Once you start playing with this, the possibilities are endless! 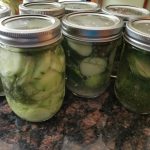