Skip to content
By Meg08/05/2018Book ReviewLeave a Comment on The Elizas by Sara Shepard: A Book Review

The Elizas by Sara Shepard 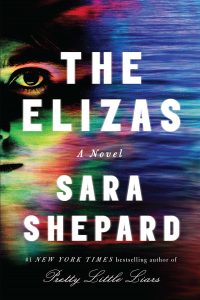 So I have to admit from the start, I couldn’t decide if I liked the book, in fact I still don’t know if I did.  I do know, however, that I couldn’t stop reading it.  Just when you think you can put it down, you can’t!  I would recommend this for a book club, it seems like it would have a lot of conversation associated with it, I feel like reading half first to discuss theories would have been a lot of fun.  Personally, I read it in about 2 days so that wasn’t going to happen for me!

The main character Eliza, is writing a book about Dot and her aunt Dorothy.  As the story goes on, you learn that Eliza, as well as Dot, have had some medical issues and clearly there is some truth in the story she is writing.  Eliza goes to the Tranquility Hotel, to find herself pushed into the pool, drowning due to her lack of swimming prowess.  Now this isn’t the first time that Eliza has ended up almost drowning but other incidents have been suicide attempts so obviously her family does not believe her when she begs them to listen to her.  Eliza just can’t let this go and does some of her own investigating where she falls into the proverbial rabbit hole, truth and fantasy being distorted and sometimes tangled and entwined.  We meet a host of characters from the present and the past, faded memories that are nagging Eliza and peculiar behavior from those she is closest too.

I have to say, this is similar to the feel of The Girl on The Train, The Woman in Cabin 10, He Said/She Said…  All of them I am glad I said I read but they start getting old after a while.  This was a pretty good read, making you feel like you are unsure what is reality and what is fantasy, the characters all are flawed enough to think they are in on the mystery, keeping you guessing.  While I wasn’t excited about this one in the end, I was say it was pretty good and it would make a good book group read!