Prior to joining my husband’s family, I had no clue what a sauerbraten was, let alone where Luxembourg was.  I probably couldn’t even tell you it was a country but fast forward to today, I am a member of the Luxembourg Brotherhood of America, Section 15 and a member on the Sauerbraten Dinner committee.  My brother in law wanted to take over the dinner with some new ideas to keep the dinner tradition alive and of course my husband, father in law and myself jumped in to help him.  The first dinner was a success however the second year, the restaurant where we have always gotten the sauerbraten no longer offered catering so we moved to a banquet hall.  We did a tasting, it was great but at the actual dinner, it was nothing like it.  So this year we are going to give them our recipe but what is our recipe?  Do we go with the LACS cookbook, the Berghoff Family Restaurant’s recipe where we catered from?  So in the spirit of fun, I did a blind taste test with both of those and threw in a wildcard; Alton Brown’s recipe that I normally use.

We started with the Berghoff recipe from their cookbook.  They use eye of round and throw all the marinade ingredients in a bag with the meat and refrigerate it for 3 days.  It is braised for 3 hours and in the sauce, you add red wine and A LOT of sugar.  The results: Too sweet but the sourness was spot on.  The meat was tender but sauerbraten is supposed to be a tougher cut of meat so it didn’t feel right.

Next we tried the LACS Cookbook which you can buy at the LACS (Luxeumbourg American Cultural Society) Center in Belgium, Wisconsin.  It uses a chuck roast which is refrigerated for 3 days with the marinade after it’s been boiled and cooled.  It is then browned after it marinates and then braised for a few hours on the stove top.  What was interesting about this one is that it is finished with sour cream.  The results:  It was delicious however it didn’t taste much like sauerbraten, more like a stroganoff.

Finally we tried the Food Network, Alton Brown recipe which uses a bottom round and browns the meat before it is marinated.  The marinade is also boiled off and cooled before being refrigerated for 3 days.  It is then braised for a few hours in the oven, but the key component here is in the gravy, gingersnaps are used.  The result:  It is a tougher cut of meat and not as sour but delicious.

The winner?  The Food Network recipe although we would tweak it to add white vinegar rather than apple cider and red wine vinegars.  The Berghoff came in second but was just too sweet and the LACS cookbook just didn’t remind us of a sauerbraten.  Good show, good show! 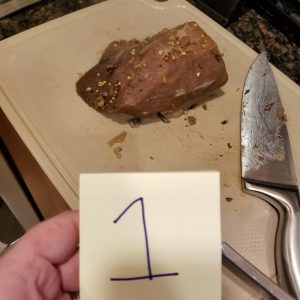 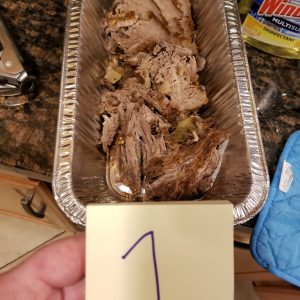 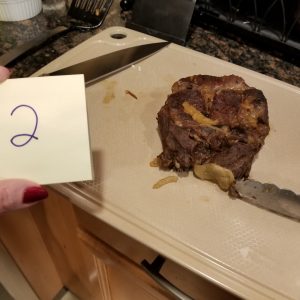 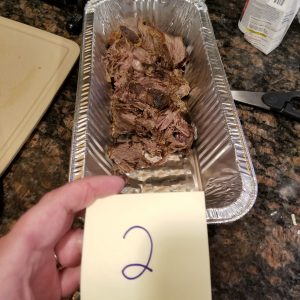 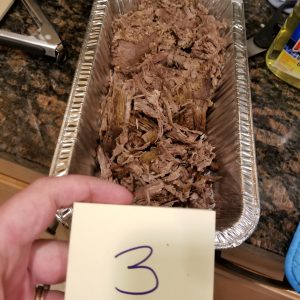 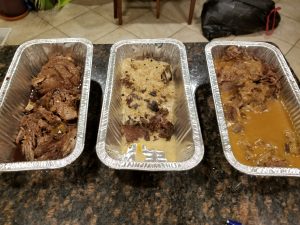