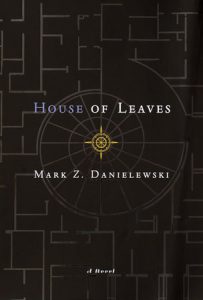 What the FUCK?!? Yes, that is my first reaction and pretty much sums up this journey.  House of Leaves by Mark Danielewski takes the reader through some intense, creepy and often times crazed dialogue that makes one wonder who is the crazy one.  Imagine The Blair Witch Project being rewritten and narrated by Gary Busse… Yes, ponder that for a moment.

“I still get nightmares. In fact, I get them so often I should be used to them by now. I’m not. No one ever really gets used to nightmares.”

I picked up this book as part of a group read through an online book club I am in.  I enjoy some horror, I like Stephen King but not too much where I can’t sleep.  I looked up the description on Goodreads and re-read it like 20 times because I realized, it really didn’t give me plot description.  You read it, you tell me if you really get a sense for what the story is…

Here is my synopsis, which ironically could be completely different than how someone else interprets the book (got your attention?  Yeah? Cause that is how crazy this book is).  The book is written mostly like a documentary (making it even more creepy) about a family that moves to Virginia and finds that this closet that appears, (yes appears) keeps changing shape, eventually turning into a hallway, then into an endless cavern.  The main character Davidson and his brother Tom, along with a couple friends set up a movie/documentary to explore this “space” (for lack of a better word), which then becomes viral.  As it continues, it turns into a documentary on a documentary which then another gentleman finds and it is his story soaking all this in.

It often changes viewpoints, there are so many references that you can Google and apparently they exist.  I couldn’t imagine researching everything Danielewski referenced, it would take at least a year to get through but I can see how this book would become a cult following.  There were times where I doubted that this book was fiction, even as I write this I am unsure that I would categorize this as fiction.

“Then no matter where you are, in a crowded restaurant or on some desolate street or even in the comforts of your own home, you’ll watch yourself dismantle every assurance you ever lived by. You’ll stand aside as a great complexity intrudes, tearing apart, piece by piece, all your carefully conceived denials, whether deliberate or unconscious. And for better or worse you’ll turn, unable to resist, though try to resist you still will, fighting with everything you’ve got not to face the thing you most dread, what is now, what will be, what has always come before, the creature you truly are, the creature we all are, buried in the nameless black of a name.
And then the nightmares will begin.”

There were times where I couldn’t put it down and then it took off out of nowhere, Danielewski lost me, taking a sharp left down a passage I didn’t know existed.  I thought ‘no problem reading this before bed’, then I get up to brush my teeth and take my contacts out, second guessing my choice.  Did I see something in the hall? If I take my contacts out I can’t tell if the walls moved? That picture is crooked, did that just happen?  How did that happen, indeed?

“For some reason, you will no longer be the person you believed you once were. You’ll detect slow and subtle shifts going on all around you, more importantly shifts in you. Worse, you’ll realize it’s always been shifting, like a shimmer of sorts, a vast shimmer, only dark like a room. But you won’t understand why or how.”

While I would only give this book a mediocre rating for content, because of losing me so often, I must give credit to the man who can creep me out like that.  A lot of people are excited to read the next one in the series however that won’t include me.  This book was a bit intense for me and although it sparks my curiosity to Google the thousands of references in this book, which just like the book, will lead you through a dark narrow hall that you may never come back from.

If you enjoy horror, I say it is worth reading!  If you do not, don’t attempt it!